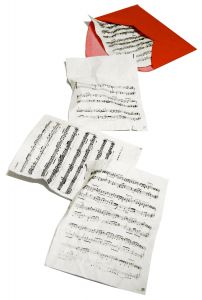 Are you in the mood for a good cry?!

Or maybe you just need goodbye songs for a going away party?

Check out the farewell songs below, whether to enjoy wallowing in your sadness, or to find just the right commemorative anthem!

Click on the links below to view the farewell song videos on each page...

Don't You Love Me No More - Henry Priestman
Redundancy song. Very clever lyrics about leaving work on a low note.

The Call - Regina Spektor
Very pretty ballad about hope, and sending someone off to war.

Keep Me In Your Heart by Warren Zevon
Light folk song with a chant-like chorus that becomes heart-wrenching.

Time of my Life - David Cook
Power ballad celebrating the now and diving into the future.

Breakaway by Kelly Clarkson
Power ballad - glad to get away from a small town and fly.

Here's To The Night by Eve 6
About friends staying in the moment as long as possible.

Wherever I go by Miley Cyrus and Emily Osment
A light, sweet song about looking forward.

I'll Always Remember You - Miley Cyrus
A song about people moving forward on their own paths.

R&B:
It's So Hard To Say Goodbye To Yesterday by Boyz II Men
Moving, slow R&B song with beautiful vocals.

I'll Be Missing You (B.I.G.) by Puff Daddy
The title says it all - a song for grieving.

Times of your life by Paul Anka
Slow 70’s ballad.

Farewell to the Old Me by Dar Williams
Farewell ballad about leaving the past behind and becoming a different person.

A Summer Song by Chad and Jeremy
Nostalgia without being over-sentimental.

Country&Western:
I Hope You Dance by Lee Ann Womack
This country ballad is a tear-jerking friendship affirmation.

Musicals:
We'll Meet Again by Vera Lynn
Famous World War 2 song, that although not originally from a musical as it debuted in 1939, this goodbye song gave its name to the musical 'We'll Meet Again' in 1943 with Vera Lynn as the lead actor.

For Good from the musical Wicked
Lovely uplifting sisterhood duet. A farewell ballad of heartfelt thanks.

Friendship ballads:
You've Got A Friend in Me - Randy Newman
Blues-y, uplifting song about friendship no matter what the future holds. From the movie "Toy Story".

Lean on Me - Bill Withers
Soul Ballad originally performed by Bill Withers, also presented with a version by the cast of Glee.

Because You Loved Me by Celine Dion
Very moving love-affirmation song.


Footprints In The Sand by Leona Lewis
Another tear-jerker!

Spiritual:
God Be With You
Solemn Christian hymn based on the etymology of “good-bye,” which is “God be with ye.”

Into My Arms by Nick Cave
A ballad for when you are wishing the safe return of someone dear to your heart.