So you're retiring?  Gettin' old?

Laugh retirement in the face and lighten up with a bit of humor.

Use the following retirement jokes and quotes for the final farewell speech, the farewell card, or just for a different perspective while you check your life savings:

The funny retirement poems have to be better than this!

This joke is really punny...

My first job was working in an orange juice factory, but I got canned...couldn't concentrate.
After that I tried to be a tailor, but I just wasn't suited for it...mainly because it was a so-so job.
Then I tried to be a chef -- figured it would add a little spice to my life, but I just didn't have the thyme.
Next I tried working in a muffler factory but that was too exhausting.
I managed to get a good job working for a pool maintenance company, but the work was just too draining.
I attempted to be a deli worker, but any way I sliced it, I couldn't cut the mustard.
Then I worked in the woods as a lumberjack, but I just couldn't hack it, so they gave me the ax.
Next was a job in a shoe factory; I tried but I just didn't fit in.
So then I got a job in a workout center, but they said I wasn't fit for the job.
After many years of trying to find steady work I finally got a job as a historian until I realized there was no future in it.
I studied a long time to become a doctor, but I didn't have any patience.
My best job was being a musician, but eventually I found I wasn't noteworthy.
I became a professional fisherman, but discovered that I couldn't live on my net income.
My last job was working at Starbucks, but I had to quit because it was always the same old grind.
SO I RETIRED AND FOUND I'M PERFECT FOR THE JOB!

Sometimes the good old joke gets, well, old.  A quick search on the internet using the search phrase "retirement meme" will throw up some hilarious captioned images.  For those of you not up with the times, some examples of memes are below to educate you - 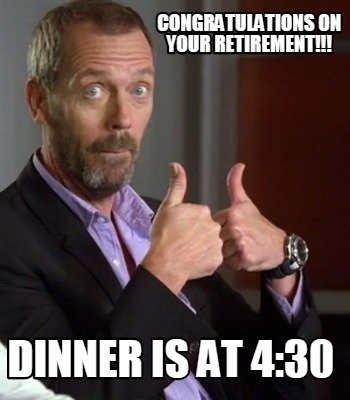 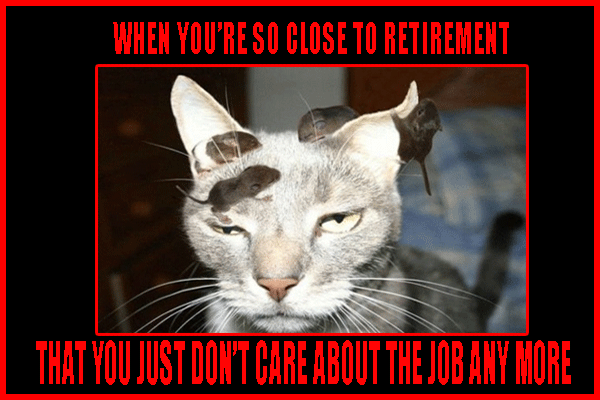 If you have to give a retirement speech, having one of these memes behind you would be a hilarious distraction taking the attention off you (if you are nervous about speaking).

Retirement Gifs:
These animated images, called gifs, are not recommended to play behind you while you give a speech (it would give everyone a conniption), these are just for your own enjoyment :)  Again, an internet search will throw up many animated images for your persual, with examples such as below -

These are simply terrible. Give me my dignity back with some wiser, more thoughtful retirement verses.